Cranial Sacral Therapy (CST) is a light touch healing practice that balances the cranial sacral system in the body. This system includes the bones, nerves, fluids and connective tissue of the skull, the spine, the sacrum and ultimately all tissues of the body.

A cranial sacral therapist works with the cranial sacral system by gently working the spine, the skull and its cranial sutures, diaphragms of the body, and the fascia of the body, (connective tissue). CST eases the restrictions in nerve passages. Flow of cerebral spinal fluid through the spinal cord can thus be optimized, allowing for misaligned bones to be restored to their proper position more easily.

Myo means muscle, and fascial means connective tissue. Connective tissue is a 3 dimensional network of densely woven, tough tissue that surrounds every organ, muscle, nerve, bone and vessel in the entire body..
This fascial network is one continuous layer from your head to your toes. In this way you can begin to see that each part of the entire body is connected to every other part by the fascia.

In a normal healthy state the body maintains equalibrium through a delicate balance of tension and elasticity. With the proper amount of tension it helps support the efficient alignment of your bones while being elastic enough to permit full, unrestricted movement. However in response to physical trauma, stress, chemicals, or habitual poor posture, it can begin losing its pliability. Once these restrictions start exerting abnormal pressure on bones, joints, nerves, blood vessels and even organs, they unbalance the system, creating pain both locally and in seemingly unrelated areas of your body.

In order to correct myofascial restrictions, sustained, low intensity pressure is applied to a given area and the fascia slowly lengthens and eventually remains that way. Myofascial unwinding is a spontaneous movement of the body by the way of the mind. When the practitioner initiates an unwinding process by either compressing or distracting a certain area, the body will be inclined to move as it is needed to restore balance to the myofascial system.

While myofascial unwinding is gentle, it has profound effects upon the body. While each patient’s response will be highly individualized, certain common responses are seen repeatedly. Occasionally you may leave a treatment feeling like nothing happened. Later, even a day later, the effects of the treatment may occur. There may be soreness after treatment for several hours or perhaps a day. The soreness is the response of the tissues secreting lactic acid and other trapped metabolic wastes into the intercellular spaces where it can be excreted by the body’s normal pathways. The best way to aid in this process is by drinking extra water and taking an Epson salt bath which aids in flushing toxins out of the body.

Generally acute cases are typically resolved with a few treatments. The more chronic the problem , the longer it usually takes to bring lasting results. 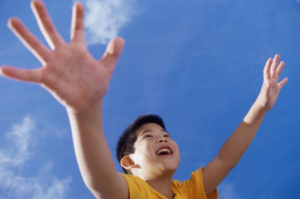 How CST saved my son

“At 18 months old, my mild-mannered baby started to throw horrid tantrums. He screamed. He cried. He slammed his head into everything from walls to floors. It was heart-breaking as I geared up for what everyone called the “Terrible Twos.” But as time went on it got worse. My son started grinding his teeth, whether he was awake or asleep. Eventually he even preferred sleeping on the floor instead of in his own bed.

I researched everything I could find, from parenting styles to plagiocephaly to autism. I felt in my spirit there was more going on here than just a 2-year-old thing. But what?

Then the summer that my son turned 3, a nurse I was talking to on the phone overheard him in the background. When she asked about him I explained that everyone told me he would grow out of it. But I also told her I had my suspicions that he had some kind of head pain. She concurred and suggested I try Tylenol to see if he’d calm down. It worked!

We needed to address the head pain he was experiencing. Fortunately, I’d already researched Cranial Sacral Therapy (CST). My nephew had been treated for torticollis using CST with remarkable success.

The results were dramatic:
~ One appointment and my son stopped sleeping on the floor. He also seemed to have an attitude change.
~ Two appointments and he stopped grinding his teeth.
~ Three appointments and I’ve yet to see him slam his head like he used to.
~ Four appointments and everything is moving as it should, from his skull to his spine.

We continued with 13 appointments before moving to a new state. Within 6 weeks, he was asking to go back to the “massage doctor”.

Now he is 7 years old, he’s been diagnosed with PDD-NOS (autism) and wears glasses. We see Dr. Bahr on a regular basis and CST relieves headaches caused by his glasses and the plagiocephaly.

I’m in awe over the changes that I’ve seen in my son after CST and recommend Dr. Bahr to any concerned mom.”